Seattle, WA – Champagne was popping and the room was filled with laughter and Seattle entrepreneurs. I took my seat at Virgin Atlantic’s Business is an Adventure event at the Axis Pioneer square excitedly anticipating what Sir Richard Branson and his guest panel had to say about the start-up culture in Seattle.

Moderator Mimi Jung of KING5 and Sir Richard Branson kicked off the event discussing Virgin Atlantic’s new route from Seattle to London, touching on similar points made in the press conference yesterday afternoon.

“Seattle is a beautiful city. It’s one of the more environmental cities in America. It has fantastic young entrepreneurs wanting to make a big difference in the world,” said Branson.

As discussions on the most recent Virgin Airline news concluded, Jung introduced the guest panel: Founder and CEO of Hointer, Nadia Shouraboura, serial entrepreneur and CEO of PicMonkey, Jonathan Sposato, and influential photographer as well as Founder and CEO of CreativeLive, Chase Jarvis.

Jung asked the panel, “how would you describe business as an adventure to you?”

Nadia: “There are lots and lots of downs… [and] there are moments up,” laughing as she responded.

Jonathan: “The fun of it is to learn something new to apply it forward. Take stock of what’s life and what you’re chasing to spend time on, because time is so precious… it better be fulfilling.”

Chase: “Never before have there been so many opportunities to learn from others. To spend time around amazing people, build community, because of the internet,” reiterating the ease of accessibility CreativeLive offers for those aiming to develop their creative side.

The remainder of the panel discussion had a lens around the most common challenges entrepreneurs face: gender equality, getting started, and growing from failures.

Gender equality
“(Some) of the biggest challenges in tech are diversity and gender quality. Only 7% of board members of Fortune 500 companies are women. We need more female funded companies,” said Jonathan. While no one gave a physical standing ovation at his comment, the room (filled with a mixture of women of men and women) loudly clapped.

Getting started
Chase: “Thinking about a global stage can be intimidating and scary. There’s a lens of diversity, access, cultural awareness that you need to have in every decision you made. I encourage people to think small; there’s nothing harder than getting started.”

Richard: “If you don’t do that [make a difference in people’s lives], you don’t deserve to survive, and most likely won’t survive,” said Richard.

Growing from failures
Chase finished the panel discussion discussing the importance in developing grit as an entrepreneur:

“without those things [lessons learned], you are nothing.. it’s only the down moments that help amplify the up ones. That’s the gift that has put me in the position to succeed.”

An extended story on the down moments that drove Chase’s success can be found here.

Watch the full event on Virgin, and ready my in-depth interview with Chase Jarvis on Virgin here. 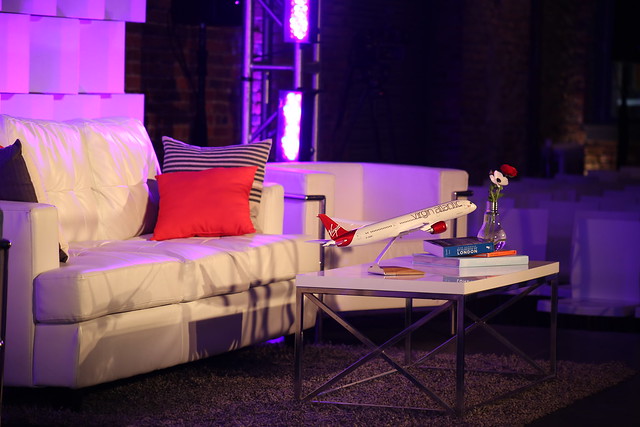 A Guide on How to Build Something Big. Become a Think Big, Start Small Expert